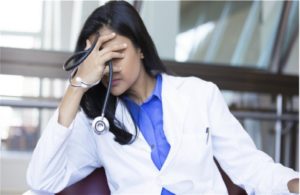 Every year, 300-400 physicians in the United States die by suicide. That is the equivalent of losing two large graduating medical school classes per year, an appalling statistic and a real tragedy, not only for the doctors themselves, but also their families, colleagues and for society as a whole. Compared to the general population, the rate of suicide is 1.4-2.3 times higher for male physicians and 2.5-4 times higher for female physicians. Not only that, but as a percentage, the rates are higher among medical students and residents than among practicing physicians. So we are losing more young physicians who have their whole personal and professional life ahead of them. It is clear we need to re-examine the causes of physician suicide and do everything in our power to prevent it.
It is well known that suicide is usually the final result of untreated or inadequately treated depression, with or without concomitant other mental illness or substance abuse. Although the lifetime risk of depression in the general population is 12% for males and 19% for females, among medical students the rate is between 15-30% in various studies. At the same time the rates of smoking and other unhealthy lifestyle habits is much lower for medical students. So although medical students clearly take better care of their physical needs than most people, they fail to attend to their psychological needs. In order to understand the the root causes of medical student depression and suicide, it is necessary to understand the concept of “burnout.”
Although depression is often a component of burnout, the phenomenon of burnout was originally described by psychologist Cristina Maslach as having 3 components: emotional exhaustion, cynicism and loss of empathy, and negative self-perception about oneself and one’s accomplishments. These components can be measured using various forms of the Maslach Burnout Inventory questionaire. One of these is found on my website. (Click here for the form.) One multicenter study of more than 4000 medical students found that about 50% exhibited signs of burnout and about 11% per year considered dropping out.
What can be done to prevent burnout and improve the well-being of the next generation of physicians? The first step is to recognize the problem and educate the students. Beginning in 2005, physician well-being programs have been mandated at all medical schools, providing awareness and resources to students. In addition, beginning in 2008, the maximum hours trainees are allowed to work was set at 80 hours/week, which is still a significant stressor. But more needs to be done. There needs to structured training in stress reduction, and physical and mental self-care, that can not only get medical students through the high-stress years of training, but which they can utilize throughout their career.