The Psychology of Positive Intelligence© 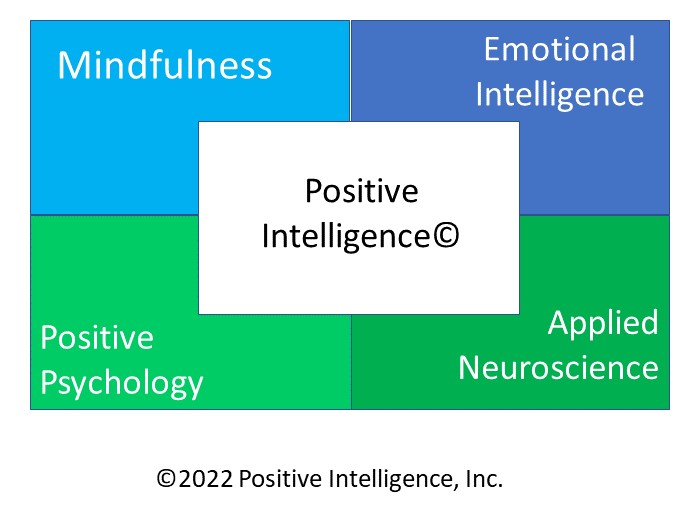 The positive intelligence program has been used by hundreds of business executives and their teams and over 500,000 people worldwide. Over 90% of participants found that they managed stress better and were able to use their mental and emotional energy more effectively. Over 80% had increased happiness and self-confidence and were better at conflict management. In this post I want to briefly review the scientific evidence behind the three psychological components of Positive Intelligence, namely mindfulness, positive psychology and emotional intelligence.

Mindfulness has been used for thousands of years in many spiritual traditions as a path to enlightenment or liberation. “Liberation from what?” you may ask. The liberation is from the constant thought chatter of our own minds and the negative emotions and actions arising from those thoughts. Psychological studies have shown that about 90% of our thoughts are negative. It’s what psychologists call “negativity bias” which is a leftover survival skill that served our ancestors well 100,000 years ago, but which now wreaks havoc with our psychological well-being and our relationships.

Mindfulness works by making our unconscious thoughts conscious through the process of self-awareness. That gives us space to examine our thoughts and gives us a conscious choice on how to think, feel and act. Thousands of scientific studies in the last 50 years have shown that practicing mindfulness results in decreased stress, anxiety, depression and burnout, and can improve cognitive function, immune function and communication skills.

Most people associate the practice of mindfulness with Buddhist sitting meditation, which for some people is unacceptable either from a religious viewpoint or from the practical viewpoint of the time and space needed for the practice. The Positive Intelligence© program uses a series of 15-second mindfulness exercises called “PQ reps” using physical sensations in the body so there is no religious overtone. These can be done individually in 15 seconds, or strung together for 5, 15, or even 30 minutes. They can be done sitting or standing, eyes open or closed so they can be applied in almost any work or life situation, to decrease stress and to be more present.

Positive psychology is a branch of the philosophy and practice of psychology that is attributed to Dr. Martin Seligman in the 1990s. Dr. Seligman wanted to turn psychology away from exclusively focusing on psychopathology to include the study of human potential. In his 1990 book “Learned Optimism” he demonstrated that a positive optimistic mindset resulted in improved quality of life and that this mindset could be learned and acquired.

Dr. Carol Dweck in her book “Mindset, The New Psychology of Success” differentiated between people with a “fixed” mindset who fail to reach their full potential versus people with a “growth” mindset who embrace challenge and reach ever higher levels of achievement. Adopting a growth mindset is the basis of much of the Positive Intelligence program, specifically the Sage Perspective. Dr. Barbara Fredrickson in her 2009 book “Positivity” show that there is approximately a 3 to 1 ratio of positive to negative experiences in high functioning teams and relationships. That is the “tipping point” to entering an upward spiral of thriving. She developed a positivity ratio which is the basis of PQ in Positive Intelligence.

Emotional intelligence is another concept often attributed to Dr. Seligman. It is made up of four competencies: self-awareness, self-management, social awareness and relationship management. Research has shown that positive intelligence accounts for 58% of performance in all types of jobs, which is why people with high IQ outperform those with average IQ only 20% of the time, while people with average IQ outperform those with high IQ 70% of the time. It is emotional intelligence (EQ) not IQ or personality type that determines much of success.

Research has also shown that emotional intelligence (EQ) is a set of skills that can be learned and trained. That is why I have found that the Positive Intelligence program, with its emphasis on practicing the Sage Perspective and Sage Powers is one of the fastest and most efficient ways of raising EQ. The program gives you a specific set of skills that help you empathize with yourself and others and communicate in a way that reduces conflict. This positive effect multiplies when a whole team learns and practices Positive Intelligence together.